He was a prominent disciple of Ricard Anckermann (1844-1907), he held 30 individual exhibitions (Palma, Barcelona, ​​Bilbao, Buenos Aires, Mao…). He participated in 14 national and international exhibitions of Fine Arts, also in 40 collective exhibitions in Palma, Soller, Mao and Barcelona. After his death, 12 tribute exhibitions have been organized. His works appear in the collections of the Govern Balear, Consell de Mallorca, Ajuntaments de Palma and Valldemossa, Ministry of Culture, Bank of Spain, Caixa de Balears and Ministry of Defense (Museu de Sant Carles), Museu des Baluard;  Museu de Lluc has a painting by Santiago Rusiñol dedicated to Joan Fuster.

He portrayed famous people from Palma, but he also portrayed popular figures such as fishermen, peasants, spinners, the owner of Son Moragues or the Parado de Valldemossa.

But most of his work would focus on the enhancement of the Majorcan landscape and the coasts of the island, particularly the landscape of Valldemossa, where he lived for almost half a century, from 1898 to 1943. Mentioning also to the subject of still lifes in courageous color studies (still life in dominant whites, blues, reds and greens). 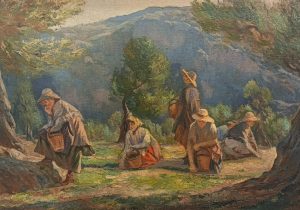 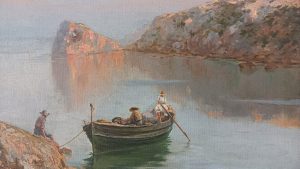