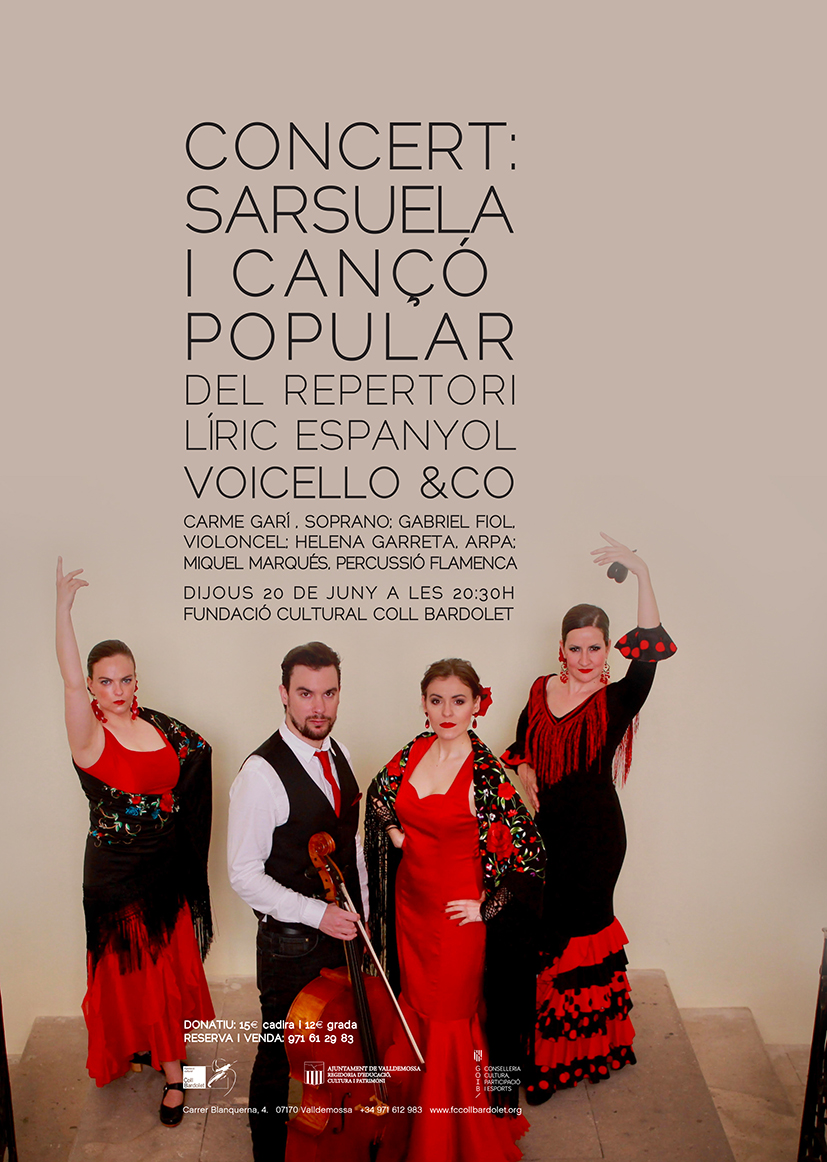 Next Thursday, June 20 at 8:30 pm at the Fundació Cultural Coll Bardolet will take place the concert of the group Voicello & Co., where they present great works of Iberian music among which are the zarzuela arias and songs of great composers of the Spanish lyric. To accompany the soprano Carme Garí, we find an atypical instrumentation with Gabriel Fiol on the cello and Helena Garreta on the harp, and with these Miquel Marqués on percussion with classic Spanish and flamenco rhythms.

Carme Garí started in music with piano studies that later led to singing at the Conservatorio del Liceo in Barcelona, with styles ranging from zarzuela to contemporary music. Graduated in Classical Singing and graduated in a Master’s Degree in Music Education, she combines teaching with national and international concerts.

Gabriel Fiol graduated in cello with the Extraordinary End of Career Award of the Conservatory of Music of the Balearic Islands. He plays in numerous chamber and orchestral formations. He has also collaborated with artists and musical groups for different national and international geographical points. He is the composer of the Voicello group, with an innovative style to include a pedalboard of “loops”.

Helena Garreta began her harp studies at the Katarina Gurska school, graduating later in the specialty of interpretation at the ESMUC. He has worked in different groups of chamber music and national orchestras, as well as being a member of several groups. Winner of the 2nd prize of the Iberian Chamber competition, and prize for the best interpretation of the Spanish work.

Miquel Marqués develops his musical vocation at an early age and is self-taught, beginning in the world of percussion with Han Rossmalen and Dominic Hull. Participate in theatrical and animation shows for ten years. In the same way, he collaborates in the recording of different discs and models. His concerts are several, both nationally and internationally.

For more information, you can check their website: https://www.voicello.es/