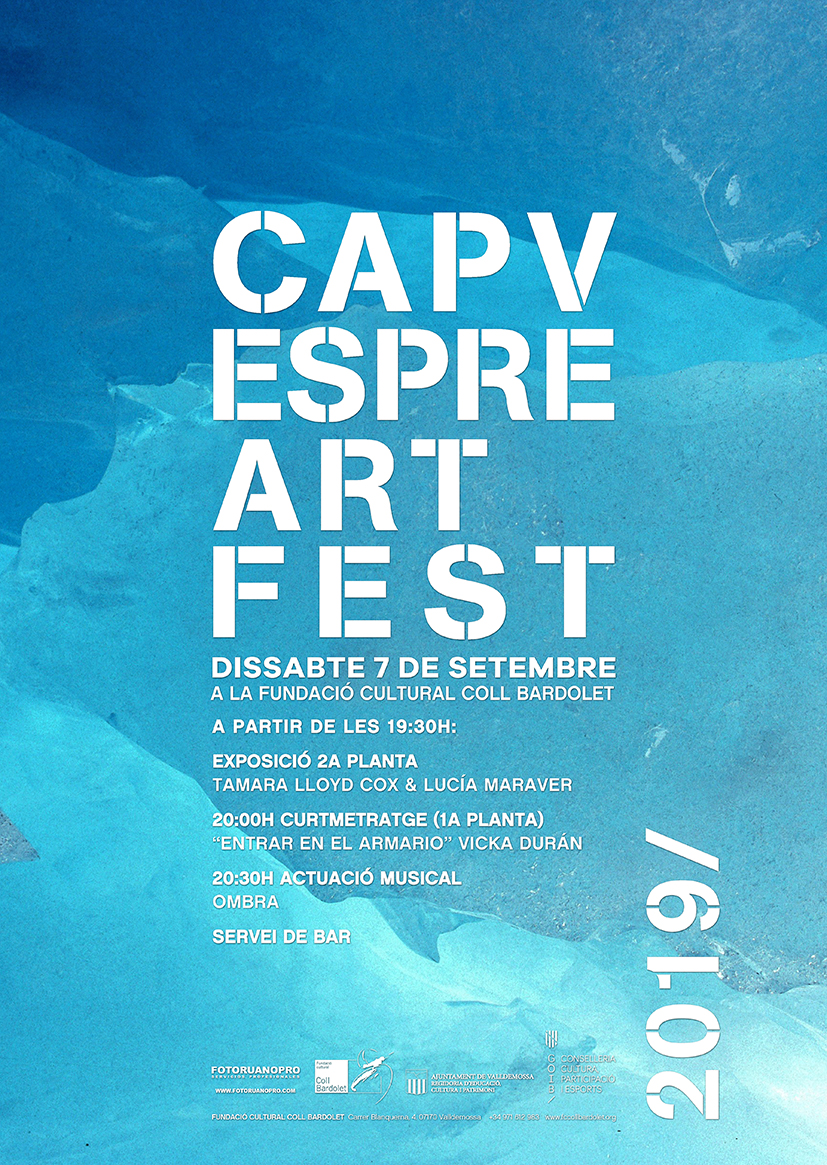 Next Saturday, September the 7 th from 7:30 p. m. it will take place the CAPVESPRE ART FEST at the Coll Bardolet’s Cultural Foundation. An event that brings together the proposals of local by our youngest artists, carried out in a festive atmosphere.

At 7:30 p. m. we will start the festival with the inauguration on the second floor of the joint exhibition of Tamara Lloyd-Cox and Lucía Maraver. Tamara (Mallorca, 1991), studied Fashion Design and created his own brand with own prints (The Cocowear). In this way, the Turistophobia series emerged, also known as Hello Guiris, a project that aims to criticize the tourist landscape of the island of Mallorca with a humorous and satirical touch. Similarly, in his illustrations we also see another more symbolic theme, with images in nature and wild animals. Lucía studied Fine Arts at the Kunstgut Academy in Berlin. Among his passions, in addition to painting, we also find an interest in analog photography, collage and visual arts. Error, magic, honesty and humor are words that describe his work. She describes herself as a chameleonic person, and it is something that translates into her work; movement, action… Lucía offers us a feeling of change and reflection about oneself and the society that surrounds us, about a system where everything has to fit.

At 20:00h will be screened the short film Entrar en el armario, directed by Vicka Duran. Formed as an actress and creator, she is the promoter of the festival Directed by Women (2018 and 2019), in which numerous short films and films are screening, all of them made by women. Vicka likes to bet on a live, honest and real theatre, with varied bets. She was perform for the first time as a creator with Domènica, 2015, whose origin is the interest and the impact that El Greco’s work had on Vicka, and the ambiguity reflected in his works. As an actress we can see her start in 2014 with Fun Parade, which was followed by Vicky o Victòria, Coses que t’he contat and Finlàndia. As director, she premiered with La Formula de la Igualtat in 2016, and after with Yamazaki, Cabaret Sauvage and Batwoman, among others.

And to end the festival, at 8:30 p.m., the concert of Ombra. Group emerged from the union of Mireia Flores, voice and acoustic guitar; Toni Matas, electric guitar; Alberto Collazo, drums; and Juan Miguel M. Ferrer, bass. They have performed numerous concerts in Mallorca at festivals and venues, and won some awards, such as L’OFF Sant Sebastià 2016, Hard Rock Rising or the Granada Sound Festival Bands contest in 2017. The main idea of this group is to give fresh air to their music, where light and colour are the protagonists with a musical style that moves in alternative pop/rock. On this occasion the group will perform songs from their albums Welcome/Goodbye (2015) and Walk up the walls (2018).