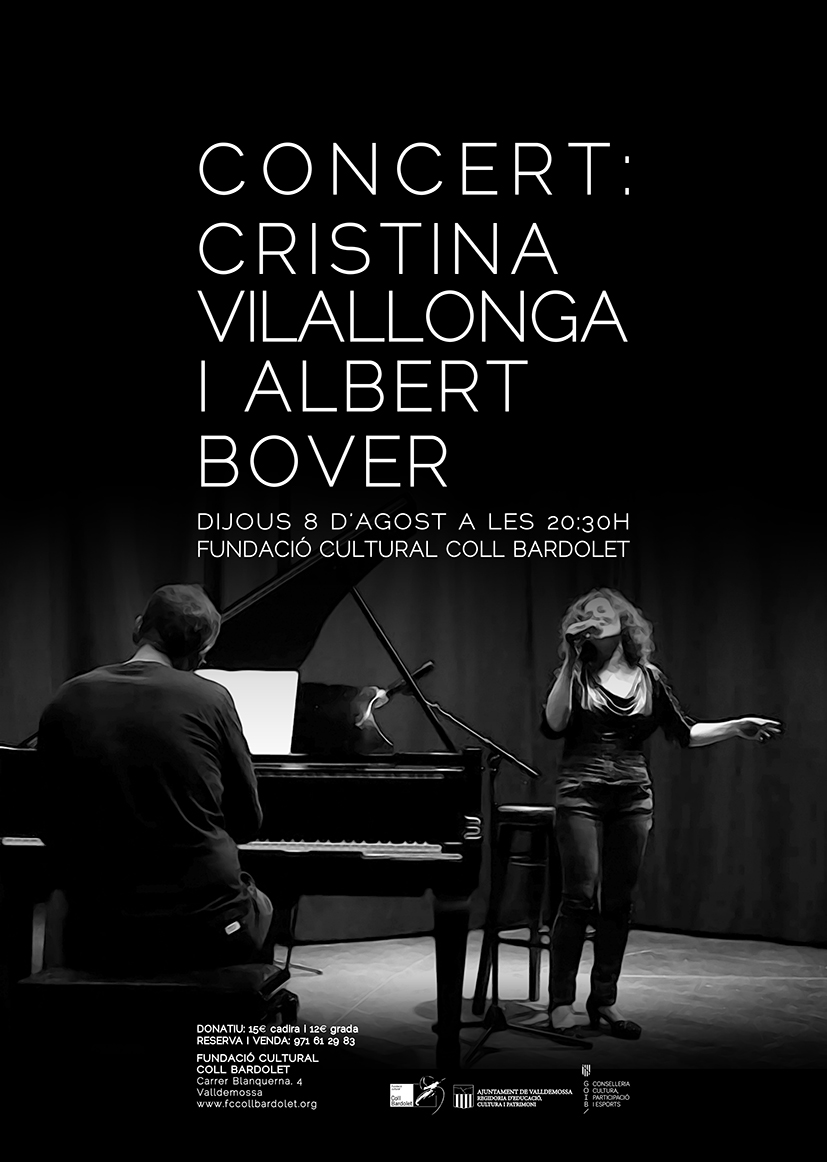 Next Thursday, August 8 at 8:30 p.m., the concert of the Barcelona singer Cristina Vilallonga will take place at the Coll Bardolet Cultural Foundation, accompanied by pianist Albert Bover.

Cristina Vilallonga is a graduate (Cum laude) in composition and soundtrack at Berklee College of Music in Boston. The author, composer and performer, has given voice to the global electronic group of worldwide success Gotan Project, obtaining a gold record at the Olympia in Paris. Vilallonga is a baby from Latin America, tango, jazz and the author’s song. He has also made the recording of 3 albums of his own: Tangled Necklaces, We are Dreams and Drunk Moon. In addition, he has collaborated with the dance company Nats Nus, for which he has composed four shows and composing soundtracks in short films, films and television series: El Domini dels Sentits by María Ripoll, El sistema Robert Hein or Para qué sirve un marido of Rosa Vergés, among others. Through sophisticated and timeless sound compositions he tells stories with great clarity and personal poetic expression through his songs or his instrumental pieces. She currently combines her activity as a composer with that of arranger, singer, producer and musical director.

Accompanying Vilallonga we have Albert Bover, one of the most important jazz pianists in Spain. After studying harmony and classical piano in his city, he decided to study jazz in Barcelona with Alvaro Is before going to New York. At the University of the New School he took classes with Fred Hersch, Kenny Barron, Barry Harris, Sal Mosca and Jackie Byard. He has collaborated on projects with flamenco musicians such as Miguel Poveda or Chicuelo, Andalusian music such as Dris El Maloumi and with other international artists such as Al Foster, Enzo Carpentieri, Eran Har Even, Idris Muhammad, Zé Eduardo or Ralph Moore. He has participated in almost every Jazz festival in the country and has performed in Europe, the United States, Argentina, Chile, Uruguay, Colombia, Morocco and Japan. Today he plays a trio with Masa Kamaguchi on double bass and with David Xirgu on drums. And a duet with Marco Mezquida, Horacio Fumero and Cristina Vilallonga. He has also been a composer and performer in the soundtrack of the film Train of Shadows by José Luís Guerin. He is currently a professor at ESMUC (Escola Superior de Música de Catalunya) since 2002, and has taught jazz seminars throughout Spain and in Europe. He is a Steinway Artist since March 2007.

During the concert, they  will perform some songs of Nus, the recent Vilallonga album with Albert Bover. In the album, she offers us songs in Spanish, Catalan and French with poems by Théophile de Viau, Victor Obiols, Blancallum Vidal, as well as her own songs and versions of some Latin American authors. A suggestive universe with influences of jazz standards and the rhythms of the new continent.